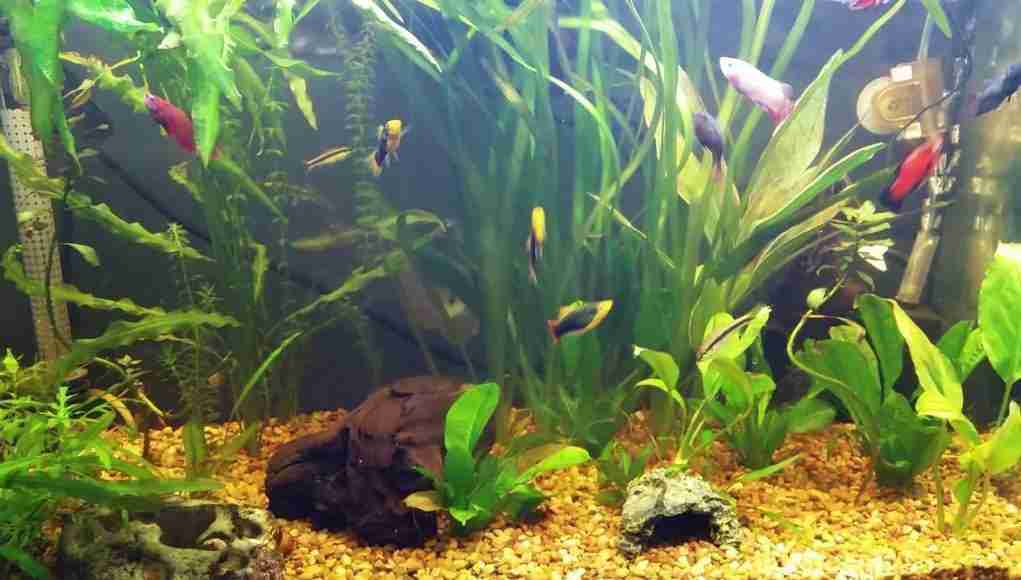 Female bettas are often overlooked by those new to the hobby and widely treasured by breeders. They vary in behavior from males and have been observed to have more personality and spunk. Sure their finnage is not as long and elegant as male bettas, but a tank full of females can be even more beautiful to observe.

It is a well-known fact that male bettas cannot share a tank. They are aggressive and will fight, possibly leading to death. While females can be just as aggressive at times, it’s possible to group them together in a tank. The majority of females will learn to live peacefully with other female bettas.

What *guidelines* should I follow for the tank setup?

When placed together, female bettas will form a pecking order or hierarchy. Therefore, it is important to keep either one (1) female betta alone, or in groups of at least three (3) or more. Keeping just two (2) female bettas together may not be the best idea because it’s likely one will become the alpha and pick on the other.

It is a good idea to allow about 2 gallons per each female betta in a tank. So the minimum tank size if you what to keep multiple females together would be three (3) females in a 6-gallon tank. The larger the tank size, the better, as it will give each fish more room and may lead to less conflict between them. The tank should have plenty of swimming room, as well as lots of plants or amble hiding places.

It’s not a bad idea to have a backup plan when setting up a tank of female bettas. It is possible that you may have a really aggressive alpha female who needs to come out of the community tank and be housed in her own tank. It’s also important to have a smaller hospital tank on hand in case you need to take a fish out of the main tank to treat her.

How do I put them together?

Before placing any fish together in the same tank, it’s important to quarantine them in a space by them self for a few weeks. This will allow you to observe the betta’s natural behavior and make sure she is healthy before joining other fish.

It is a good idea to introduce all of the females to the new tank at one time if possible. This will not give any of the fish an advantage or a chance to claim her own territory when she has the tank to herself. The first few days that you decide to put the fish in, try to be around to observe the bettas on a regular basis to see how the mix works out and that no one is being injured.

How do I tell if they’re getting along?

Once in the tank, the females need a day or two to settle in and get used to their new environment. As they become more comfortable the group will begin to form a hierarchy. They will probably chase and hide from each other. Although it may look very aggressive from your point of view, it is a natural process that must take place in the beginning. Give your females a few days together before you judge their personalities and how they interact. There is a natural progression of time that it takes to get a pecking order established.

If your females begin biting each other or nipping fins, you may want to remove the aggressive female. If you wish to try once again, in a few days try reintroducing the female back into the tank. If you have a repeat of the first incident, she is just a female that is too aggressive for the mix. It is common for some fin nipping to occur at first, but things will usually settle down within a day or two. It’s your call if you want to play it out and see if the hierarchy falls into place before removing any fish. Treating the tank with something like Melafix will help the healing process for any tattered fins.

Providing ample hiding spaces for your females gives them a sense of security and a place to retreat from one another. Once the pecking order has been established, the dominant female should then leave the other females alone.

Establishing the tank does take a bit of time and patience on your part, along with possible jaw clenching along the way as you watch the process. But just think that in a few days you could have a gorgeous group of females that coexist happily together. Maybe you’ll be one of the lucky owners who are able to watch the pecking order establish flawlessly. Of course, there are many factors your success would be based on including the tank set up, how and when the fish are added, and most importantly the bettas themselves will determine if the situation will work out.

Having a tank full of females can be quite the delight as they zoom around interacting with each other and putting on a show for you. If you’re looking for a community tank of sorts, a group of female bettas is a fun way to go!

The Ideal Size To Set Up A Betta Tank Or Bowl

Betta tank size is a controversial issue. On a purely physical level, Bettas have an efficient digestive system that doesn’t produce much waste, plus...

Expert Guide: Your Bettas Need More Than A Bowl