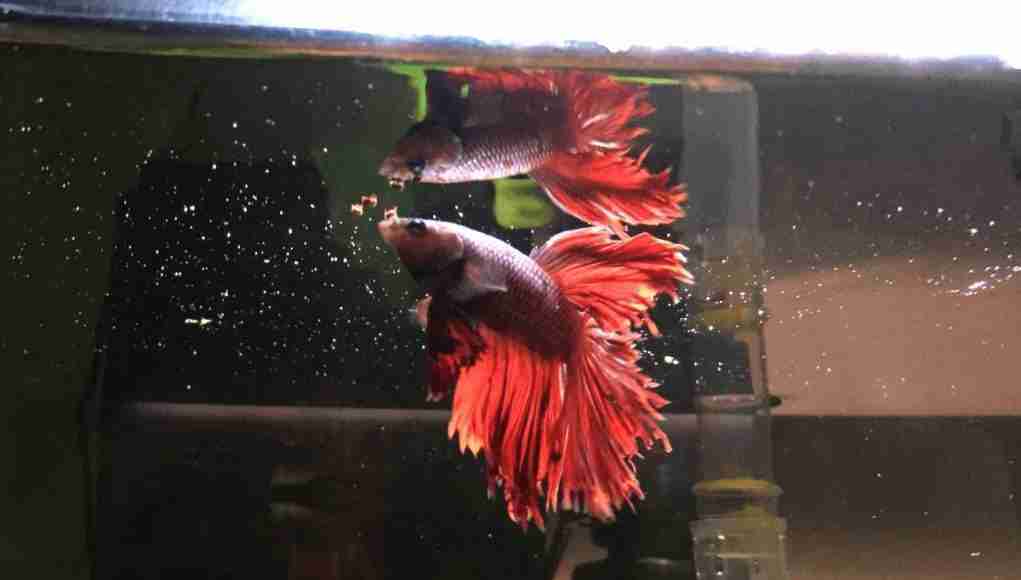 Maybe you’ve tossed the idea around in your head a few times, or even had a package of frozen food in your hand, but figured my betta is fine eating his dry pellets or flake food, why would he need anything else such as frozen, live or gel food?

I guarantee if you switch your food source, you’ll see exactly why. You will have a healthier, more colorful, active betta!

I started off like the majority of betta owners, feeding my betta’s flake food and pellets. They ate well and were healthy for the most part and I didn’t really think much of it for a long time. Then I started getting more interested in researching betta care and kept coming across people suggesting that bettas do much better with food that closely resembles their natural diet. Bettas are carnivores and in nature, they feast upon bugs. Hmm…that got me thinking. Although packed with vitamins and minerals that a betta needs, a hard dry pellet doesn’t really resemble a bug in shape, texture, or composition; especially when it is often made with fillers and vegetable products. Vegetable products – but I thought a betta is a carnivore? That doesn’t make sense at all, does it?

Finally, I decided to make the switch and completely phase out dry foods from my bettas’ diets (with the exception of Pepso Food to prevent internal parasites/infections). As of now, I have moved on to feeding food that comes in little packets of gel with added nutrients to preserve it, as a recommendation made by a friend. It is similar to live or frozen food in that they are real, whole bugs. It is found at room temperature at most pet stores for around $5.00 in a box that contains 16 packets of food – in the variety of Brine Shrimp, Bloodworms, or Water Fleas (Daphnia). One little packet inside contains quite a few meals for a betta as they only require a few worms or bugs per feeding, so a bit may go to waste if you do not have many bettas. If you have other fish though, they’ll probably happily devour the excess food as a special treat. Each packet will stay good for up to four days if kept refrigerated during that time. At feeding time, you simply squirt some of the food out onto a plate or napkin and use a flat toothpick to pick up a critter on the end. Next, simply stick it into your betta’s tank and wait for him or her to come to eat it off of the end – or you can drop it off of the toothpick into the tank, but I find my guys tend to snatch it off right away anyway.

The brand of food I use is Tetra Nature’s Delica and it looks like this:

As a side note, the package suggests that you can just squeeze the food directly into the tank, but I wouldn’t advise that for just one betta as it is more intended for a community tank. It will be messy and practically impossible to measure the correct amount that a betta needs.

Even if you decide to go with frozen food or live cultures, feeding procedures are pretty much the same. Although with frozen food you’ll need to cut off a small sliver and wait for it to thaw before feeding it to your betta. With live food, you’ll have to culture it yourself which will take a bit of time and effort. The health benefits of all of these foods is similar however and superior to processed flakes or pellets, that do not closely resemble a betta’s natural diet.

At the first feeding, my bettas weren’t quite sure what was going on with this weird toothpick and food. By the second day though, they were absolutely thrilled with this new tasty food! Of course, bettas always get happy around feeding time and do a little wiggle “feed me dance” but now my bettas go wild! They will lunge and jump for the toothpick practically before I even get it in the water. Usually, they are pretty good about getting the food off of the toothpick without much trouble, but one of my guys likes to hang onto the end of it for dear life. It’s quite a sight to see! I think he’s afraid he’ll never taste anything so yummy again!

Not only are my bettas unbelievably excited to be fed now, but I have also really seen a difference in their appearance and personality since changing their food source. One of the main differences is that their coloring has become much more rich and bright. Additionally, they have energy like you would not believe, very feisty and active. Now I thought my bettas were happy and perfectly healthy before so I didn’t really expect too much of a change, but it was quite noticeable! Live, frozen, or gel food is also said to help ward of illness better because your betta has such a healthy diet that is very high in protein. Perhaps this will even lead to your betta living a longer, fuller life. It’s also fun to feed your betta food this way because it practically feels like they’re eating out of your hand.

With any food though, it is always important to keep portion size in check as a betta can have health problems if they are overfed. There is some debate though that hard pellets are more a source of constipation and other related illnesses than live, frozen, or gel food because they expand once in the betta’s belly and the food may clog up his system a bit. I prefer to feed my guys twice a day, Monday through Saturday, and either fast them or feed them a pellet or two of Pepso food on Sunday. So far the method is working great and my bettas and I couldn’t be happier.

Sometimes feeding live, frozen, or gel food can be a bit messier than pellet food, but usually, you’ll find that your betta will go around eating the excess debris soon after a feeding. As always, make sure to remove any uneaten food after a few minutes from the tank no matter what food source you use. One of the things that hold many people back from the switch to a better food source is the added expense and/or time involved in feeding. While it is true that it may take a few minutes to feed food in gel or a bit for frozen food to defrost, it really proves to be worth it when you see such positive outcomes in your betta as a result. The opportunity cost of switching to better food is worth it.

So I’ve learned that those who strongly suggest a change to a better food source certainly deserve credit for their recommendation. I always thought it wasn’t a necessary change, but now I see why people are so excited about it. I am sold on the idea and have become one of those that now highly suggest you give it a try. Your betta will thank you!

Lily Vase: Not a Home for Bettas

Pretty little glass ecosystems with a gorgeous fish swimming about the roots - you know you love your fish, but are you doing what’s...