As with all aquarium fish, sometimes bettas get ill. It is important to be familiar with your fish so that any unusual behavior can be detected early. Bettas are basically sedentary fish, so inactivity alone is not enough to diagnose your betta as ‘sick’, although sudden inactivity in an otherwise healthy and active betta can be suspect. Your betta could be sick, or just feeling blue. Behavior that should trigger an immediate red flag is clamping of the fins, lying on the side (although some bettas actually like sleeping this way), panting, clouded eyes, swollen gills, paleness of color, bouncing, and rubbing on the sides of the tank/bowl, spots, dusting, or ‘strings’ on the body, and sudden lack of appetite.

Betta diseases can usually be broken down into three categories: Parasitic, Bacterial, and Fungal. Here are the most common: 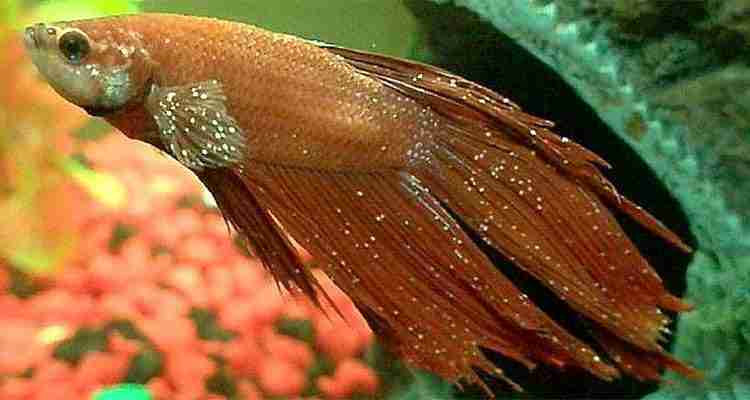 Short for Ichthyophthirius multifiliis, also known as ‘White Spot Disease’, the most common behavior associated with this highly contagious disease is clamped fins with intermittent darting around the tank and brushing against objects as the fish attempts to rid itself of the parasite. The protozoa spend a phase of their life living within the skin of the fish and living on the tissue.

The white cyst that encapsulates them gives the fish the tell-tale white spots on fins and body. These parasites are commonly found in healthy aquariums, and fish are generally immune to them unless poor water conditions, extremes in water temperature, or very cold water weakens the immune system and gives Ich an open door to wreak havoc.

To know more about this disease, read our comprehensive article on Symptoms & Treatment of Betta Fish Ich (or Ick) 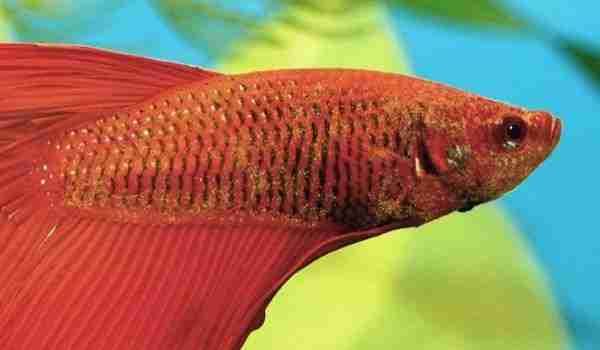 Also known as Oodinium, a fish infected with Velvet will often display clamped fins, rapid breathing, and small spots or a ‘dusting’ over fins and body. Like Ich, the fish will sometimes dart around trying to scratch itself. Velvet usually only arises when poor aquarium conditions prevail, and fry is particularly vulnerable to infection.

The parasite is extremely deadly, but in most cases respond to treatment. A copper-based medication like Maracide can make quick work of Velvet while the parasite is in its free-swimming stage. Raising the temperature to 82 – 84 degrees, dimming the light, and giving the sick fish a 3% salt bath can also be effective.

To know more about this disease, read our comprehensive article on Symptoms & Treatment of Velvet in Betta Fish 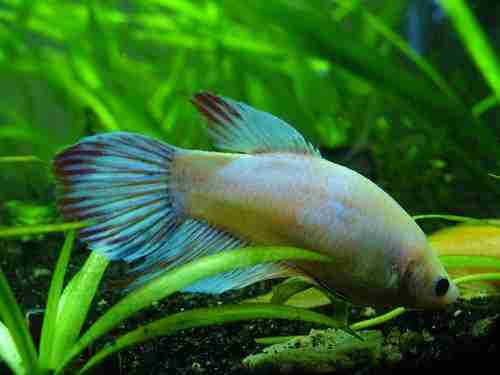 This can be a tough one to catch! Sometimes a fish will show little or no sign of sickness, but will gradually get thinner. You have to really know your bettas to even see this one coming, folks. As always, prevention is the best medicine. Rinse live and frozen food thoroughly with clean water, and do not pass bowls, nets, or other equipment between healthy fish and sick ones. If you suspect IP, put your betta into clean water and treat immediately with a parasitic medication (I like Clout, Maracyn-2, or Hex-a-Mit). Clean containers well that have been holding infected fish; scald with boiling water or clean with Clorox.

To know more about this disease, read our comprehensive article on Symptoms & Treatment of Betta Fish Internal Parasites 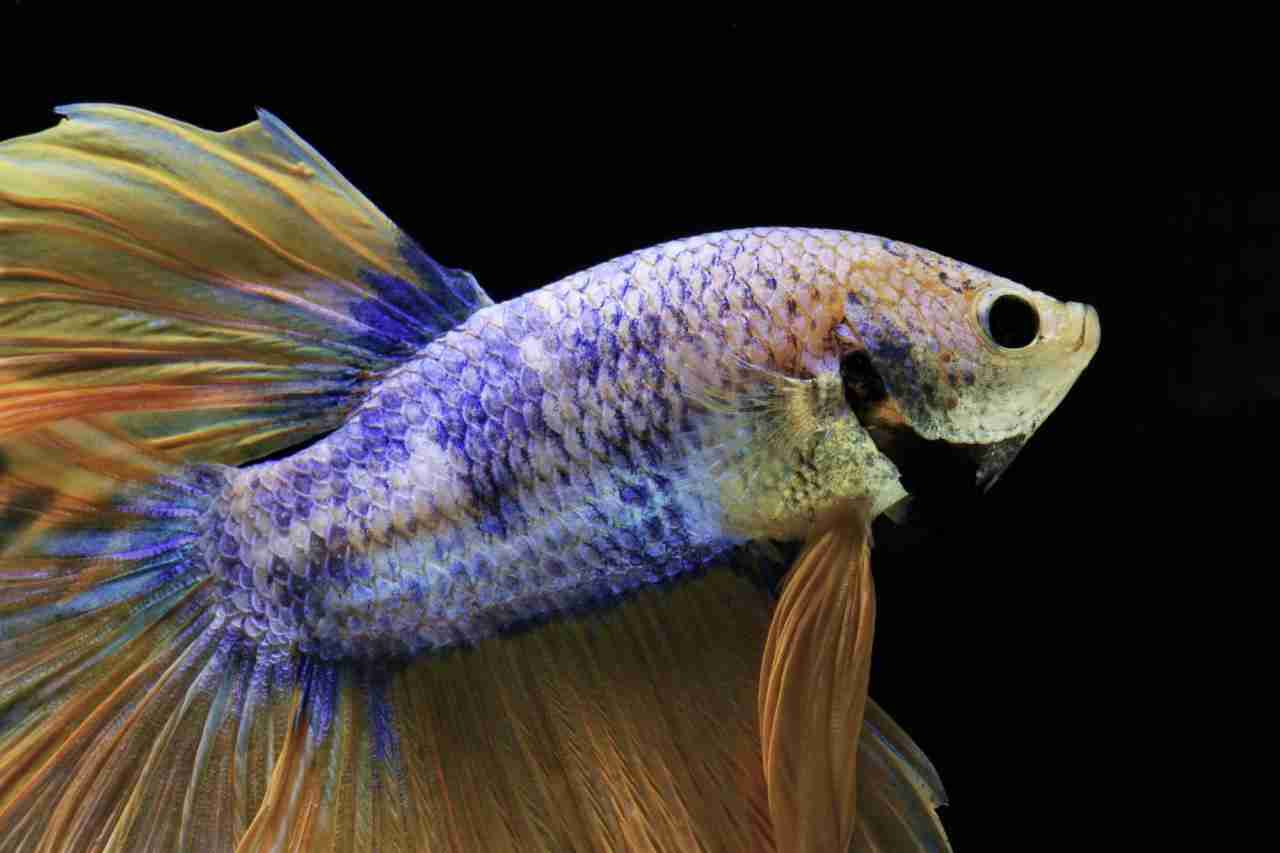 Usually, the gills are infected. A pretty obvious one to spot, since the gills become inflamed, red, swollen, and may even fungus or bleed. The fish looks and acts miserable, often clamping his fins and panting. He will also probably try to bash himself against anything he can – plants, rocks, sides of tank, other fish, etc – to rid himself of the flukes. In some disgusting cases, you can actually SEE the little buggers hanging from the fish, like long threads. You need to treat him with a good creepy-getter medication like Coppersafe, Formalin 3, or Permoxyn, and raise the temperature to 82 – 84 degrees. 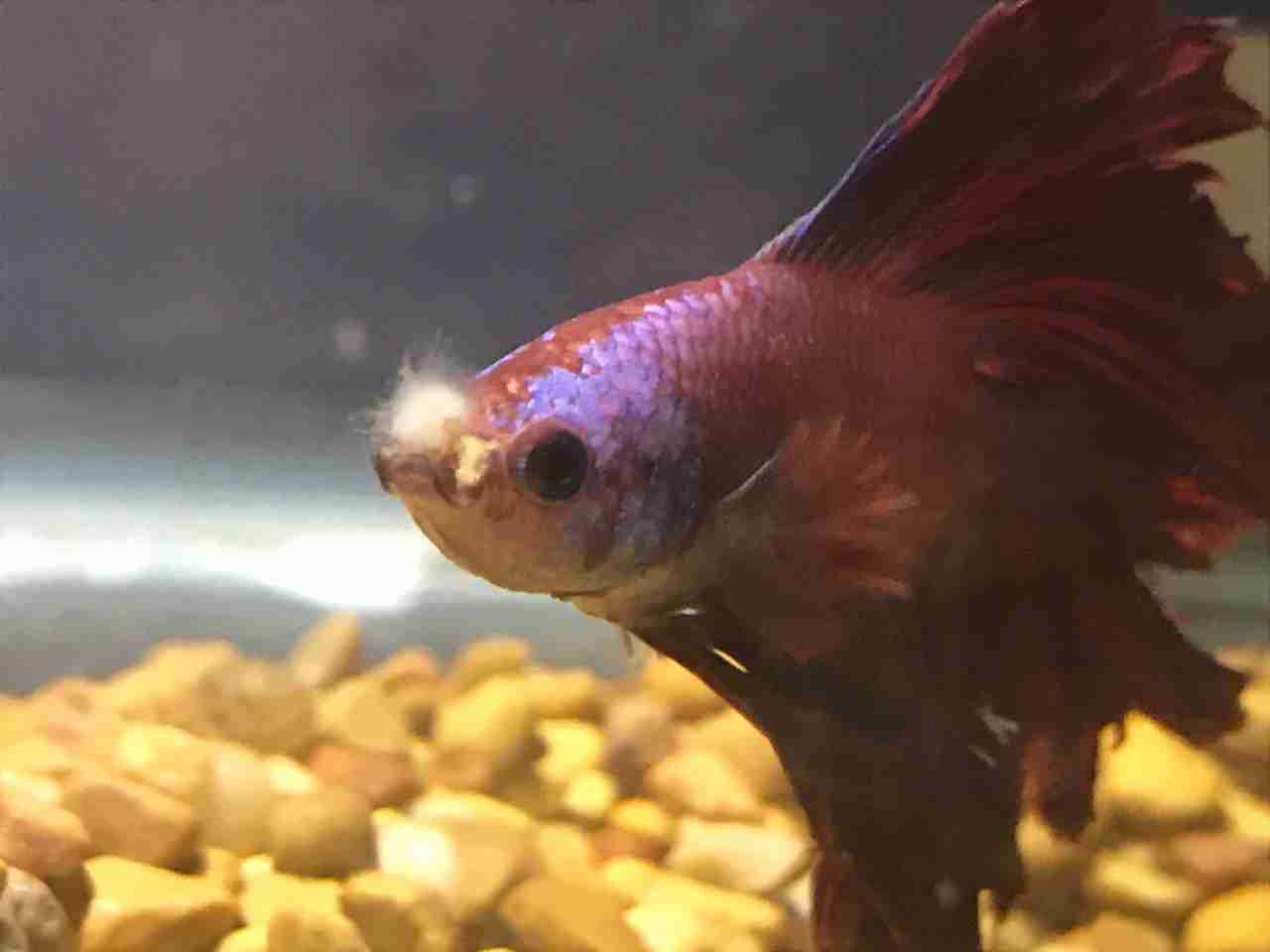 Exactly what it sounds like, it looks like your fish has cotton-growing out of its mouth and around its face. Sudden changes in temperature, poor water quality, and severe shock are contributing factors to this disease, and it can knock a betta out fast if untreated. Fungus Eliminator (by Jungle) and MarOxy should take care of it. Put your betta in clean water during treatment, and please always make sure his water conditions are good when he recovers. 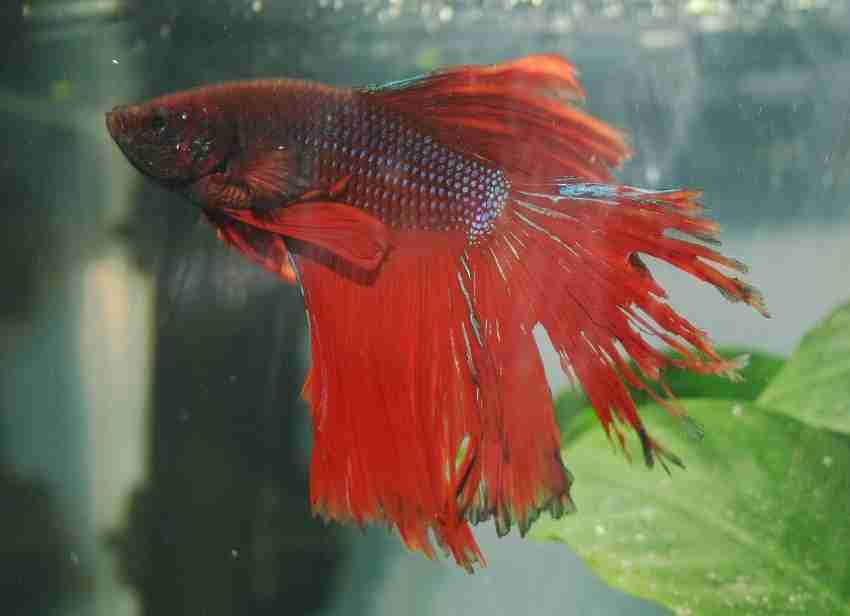 Fish has holes, tears, or lesions in the fins, and the disease will eat the fins completely away in a matter of days if left untreated! Fungal fin rot is extremely fast-acting, so treat immediately with any of the fungal medications available at your local pet store.

To know more about this disease, read our comprehensive article on Causes, Symptoms & Treatment Of Betta Fin Rot

One eye or both will protrude or will appear cloudy. Rough handling can cause Popeye (as well as a host of other things), so always handle the betta gently. Extreme temperature changes, dirty water, and over-aerating have also been named culprits. Treat him with Melafix, Maracyn-2, Ampicillix, or Penicillin. 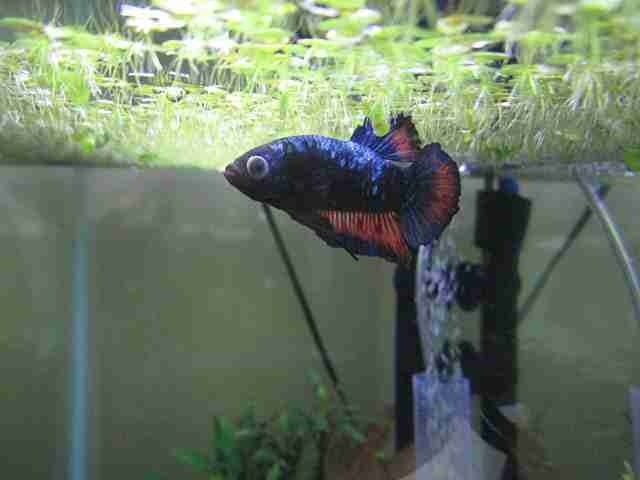 Stringy, white mucus on the body, highly contagious. Treat the fish with an antifungal, treat fish he has had contact with, and scrub, scrub, scrub the tank or bowl with bleach. If he’s been in a community aquarium, I’m sorry, but you’re going to have to dismantle the entire thing, sterilize it, and recycle it before putting the fish back in. Yes, it is THAT bad.

Usually starts with a hole or tear in the betta’s fins (often as a result of a spawning injury), and then bacteria sets in. This can be a stubborn form of fin rot, and the betta will be prone to relapses, even after treatment. If I have a fish that contracts bacterial fin rot, I know he is going to need special treatment for the rest of his life. First, he’s put on an antibiotic regimen (I use Maracyn-2 or Tetracycline) for five days, changing the water every day. Then I give him 2 more days, and if he isn’t improving, the antibiotic treatment is repeated, ONCE. After that, if he hasn’t improved, we move on to Penicillin. If I do finally manage to stop this horrible affliction, the betta gets a 100% water change, every single day; his resistance to the disease is now low, and chances of reinfection are high. This is one of the most fatal diseases to attack bettas; unfortunately, it’s also one of the most common. The jury is still out on exactly what causes it, and therefore what cures it. There is a belief that it may be a bacterial infection of the kidneys, but nobody really knows for sure. The usual recommended treatment is Tetracycline, but this is so seldom completely effective as to be inconclusive.

To further complicate matters, there seem to be several variances of dropsy. The most well-known (and the most horrifying, IMO) is when the abdomen of the fish swells up grotesquely, the scales protrude like a pinecone, and the fish can’t seem to get out of the ‘belly down’ position, with his hind-end raised. The bloating is caused by excess fluid in the body tissues and is usually evident in all dropsy cases.

To know more about this disease, read our comprehensive article on Care & Treatment of Dropsy in Bettas & Other Fish 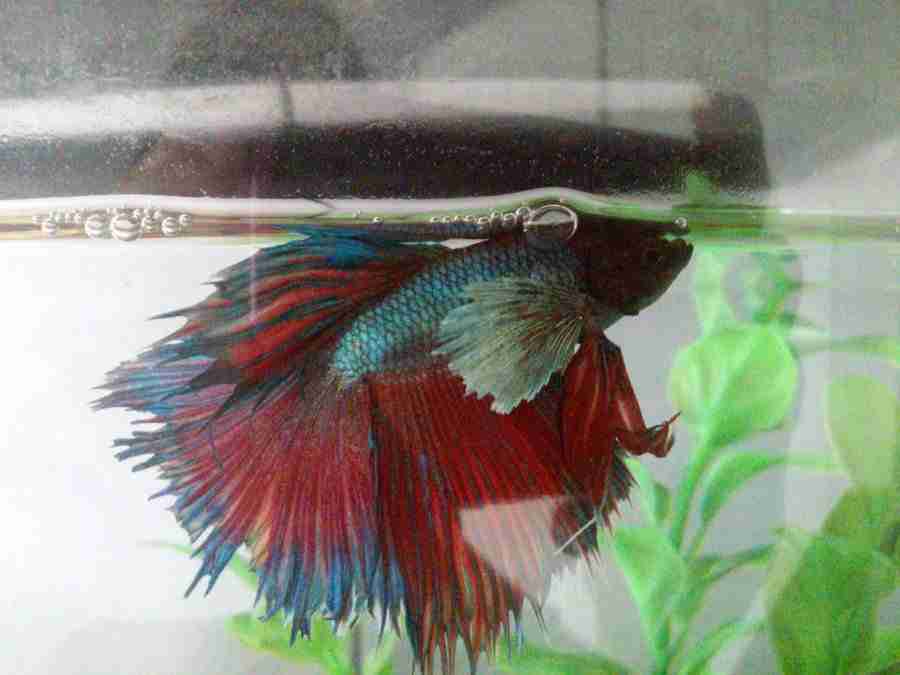 The most common assumption is that SBD is caused by overfeeding protein-rich foods like artemia (bbs) during the developmental stage of the fish. Sometimes a 24 hour fast is sufficient for getting the problem to take care of itself, and sometimes the fish just outgrows it. A betta with SBD will either swim around with its backside dragging like a cripple or just lie on its side on the bottom of the container. Some of these fish live perfectly happy and healthy lives in spite of their infirmity, but if it is so extreme that the fish can’t feed or come up for air without struggling, it may be best to euthanize it.

I find that it is a common misconception that bbs cause SBD. The overfeeding of any food can contribute to SBD; fry just seems particularly wont to gorge themselves on bbs.

To know more about this disease, read our comprehensive article on Care & Treatment of Betta Fish Swim Bladder Disorder

Bettas are intelligent animals (especially for fish) and are therefore sometimes prone to bouts of depression. New fathers recently separated from their fry will usually appear listless, pale, and may not eat for a few days. Freshly-jarred fry, suddenly isolated from their siblings, may also look pique. I had two females, sisters, who had been together their whole lives, die within days of each other. The first one jumped out of the tank, and her sister promptly stopped eating and died 2 days later, apparently from a broken heart. 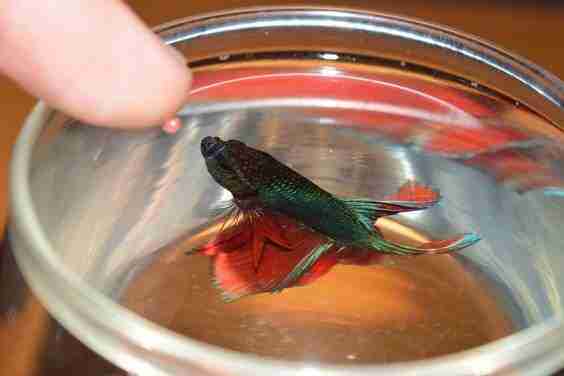 Laugh if you will, but I have had enough incidences of betta disappearances that it now warrants its own section. Obviously, the great majority of disappearing bettas are due to jumping from their containers. They are hard to find once they have dried out and shriveled up, and it seems that every Jumper magically finds a way to wedge itself up against the nearest chair leg or into the crack of a floor, craftily hidden.

However, I have had jars with lids screwed on tight turn up the next morning missing their betta. A friend of mine once told the story of a betta she found dead in its jar. Pregnant at the time and easily nauseated, she left the dead betta and ran to the bathroom. She didn’t have the willpower to face the corpse again until the next day, and when she mustered up the courage and went to get the dead betta for its Last Great Adventure down the commode…it was GONE.

It does happen, of this I am fully convinced. Unfortunately, there isn’t much I can say to help you if you have a Disappearing Betta. Maybe he was called back to his home planet to report on the goings-on of Earth. Maybe he was a victim of Spontaneous Betta Combustion. Who knows? Just promise me this – if any of you have a betta go missing and then REAPPEAR in his jar, email me immediately!