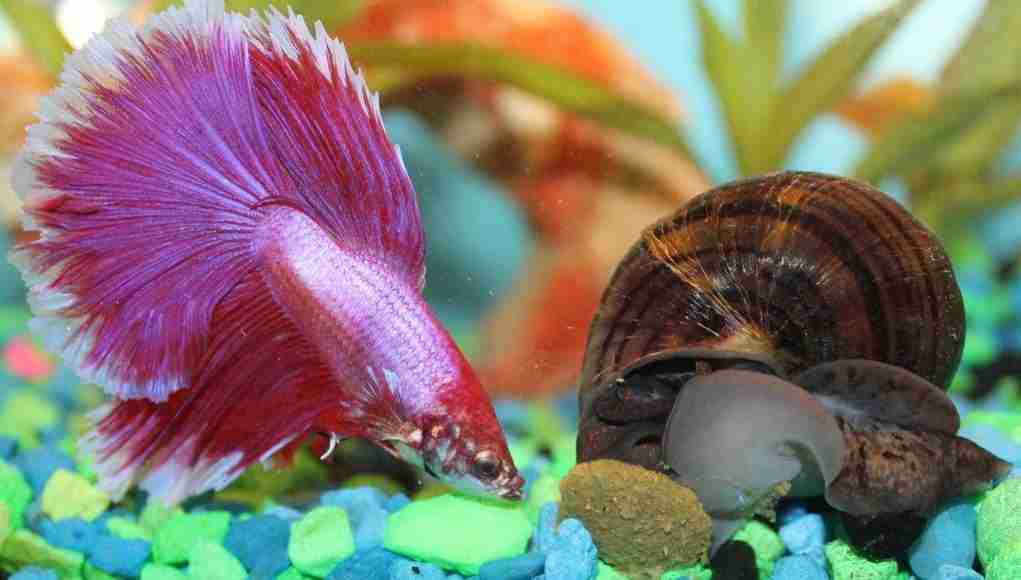 The start of a long series of articles to help you determine other aquatic life that makes great tank mates for bettas.

I have heard many times over that bettas should always remain in a tank by themselves. Even though I do have bettas that are alone – I have owned several bettas that did well in a community tank. Of course, just as some humans get along well with others – some do not. You just need to know your betta’s personality and see if he would be a good community asset.

Note: female bettas generally are very communal and enjoy being in a tank with other fish.

As with any fish, your betta might not like his new friend so you want to be sure you have something to do with the friend in case they turn out to be enemies (and I’m not talking flush!). See if the store where you purchased the friend will allow a return or have another tank ready.

There isn’t much left to the imagination when I say snail.

Snails make good tank companions as long as they aren’t too small and you are sure to only introduce ONE snail to your tank.

Snails are air breathers as well and do not need filtration; however, they do have a lot of fecal excretions and you might want to consider either a small air filter or more frequent water changes in order to help maintain a healthy ammonia level in the tank.

I have had a lot of entertainment just watching my snail and betta argue over who goes in the hidey-hole or who gets to sleep next to what plant. They make a very curious couple and do keep each other enough company to help defeat any depression your betta might have. In fact, my first snail COBOL was purchased because my betta DOS became depressed. Within the hour, DOS was swimming around and eating normally as well as checking out his new bud.

Snails come in many colors including bright yellow, jet black, and ash grey.

Quick highlights of having snails in your tank

1. Only have ONE (they will breed profusely and you will end up with a big problem on your hands!)

2. Get a larger size because a betta will eat any live food that is small enough to consume. The bigger the better.

3. No filter is needed but due to increased fecal matter, more frequent water changes are needed.
4. If you notice your betta attacking the snail/biting at it – he might be trying to eat his feelers. Remove the snail at once.

5. The snail will need to eat around 2 times a week with the amount of food he can consume in 2 HOURS. There isn’t enough algae growth made by one fish to maintain a healthy diet for it. You can buy bottom feeder food pellets for the snail for around 2 US dollars.

Lily Vase: Not a Home for Bettas

Pretty little glass ecosystems with a gorgeous fish swimming about the roots - you know you love your fish, but are you doing what’s...

Can Goldfish Live in a Bowl? Myths Debunked