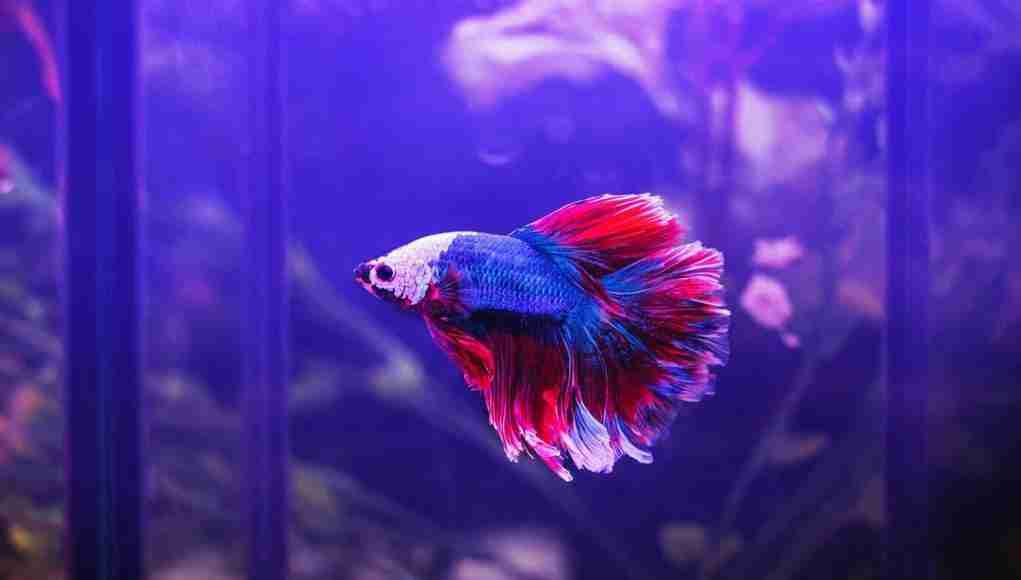 You’re sitting there watching your betta when all of a sudden he’s swimming in circles and chasing his tail. The next thing you know, chomp! He’s just taken a big bite out of his caudal fin. Or perhaps you don’t actually witness the biting, but you see the tell-tale sign of clean, crisp chunks missing from the fin. Does he think he’s a dog? What is wrong with him?

These are some questions you may be thinking about when you are faced with a tail-biter. Why is my betta fish biting his tail? And how to get a betta fish to stop tail biting?

Betta fish tail biting is becoming a more common occurrence that betta owners need to figure out how to stop it. Tail biting is an indicator that something is bothering the betta so put on your detective hat and let’s start to consider the possibilities.

Tail biting is generally not caused by an illness, but you’ll want to examine him closely to rule this out. Is he darting around the tank or twitching? Do you see any physical signs of parasites or growths? Pull out a magnifying glass and examine your betta for any signs of illness and external microbes, etc. Take a moment to check him or her for overall physical health. If you determine he is ill, treating him with the proper medication should hopefully stop any symptoms, including the biting.

So what are possible causes if my betta is not ill? Here are some factors to consider for your betta. Determining the cause of tail biting is through the elimination of issues that could potentially be bothering him.

Your betta could simply be bored. Is his environment stimulating for him with lots of places to hide and explore? Try changing his tank around or if possible move it to a new location. Does he get daily interaction with you or flaring time with another betta? Showing him a mirror to flare at for a few minutes each day can perk up his activity level. Would he benefit from a tank mate such as an apple snail (space allowing)?

Is your betta recovering from illness? Has he recently been moved into a different tank? Is there a tank mate that bothers your betta? Just as we are stressed out from new and different activities, so can fish as they adapt to things. Changes in our schedule also mean changes in our betta’s schedule. Have you changed feeding times or the light pattern for the tank recently? Have you altered the frequency or amount of water changes? These are some things you’ll want to try to keep consistent for your betta.

It has been thought that some bettas will bite their tail if they are hungry. Perhaps try slightly larger feedings or add more variety to your betta’s diet on a regular basis. This may or may not be an actual cause of tail biting, but your feeding routine for your betta is always important to keep in mind for overall health.

Have you been changing the waterless or more than normal? Have you been testing water parameters on a regular basis to make sure everything is safe? The water in which your betta lives is the most important factor in keeping him healthy, so you should test it on a regular basis. Is the temperature varying from night today more than it should be? Try to always keep your betta at a stable 78-80 degrees Fahrenheit.

Has anything else changed recently that you can think of? Tank setup, feeding, water additives, schedule, tank, or flare mates?

Having a tail-biter sure is frustrating!

Unfortunately after eliminating common factors, sometimes it is still impossible to figure out what is causing your betta to bite his tail. It is not uncommon to hear of people facing this problem for months. The betta’s fin will just start getting some nice re-growth and chomp-chomp; it’s suddenly gone again. Sometimes bettas will start doing it for only a brief period of time and stop for some unexplained reason. If you catch your betta in the act of tail biting, gently tap on the tank to distract him from what he is doing.

To help the problem while it’s occurring, it’s not a bad idea to add some Melafix to the tank to help aid the healing process of the fin. This can also help to prevent infection. Some people advocate adding a bit of aquarium salt to the tank during this time. While dealing with a tail biter you’ll want to monitor his fins for possible fin rot since they are being damaged. Fin rot is often indicated by dark or bloody edges, while clear/whitish growth at the ends is positive re-growth. If the fin damage starts to get out of control and it is very close to the body it might be time to treat with a medication you would use for fin rot, such as Tetracycline, until you see more fin re-growth.

There are many reasons why a betta may bite his tail and just as many things to try to stop his habit. Remember your fish isn’t going crazy or having an identity crisis thinking he’s a dog. He’s trying to communicate to you that he is unhappy with something.

The best of luck in the hunt to figure out what is causing your tail biter. Just remember you’re not alone, as many other betta keepers have faced the same struggle.

Care & Treatment of Dropsy in Bettas & Other Fish

What is Swim Bladder Disorder (SBD) in Bettas? If your betta fish is swimming awkwardly and you suspect swim bladder illness, you've come to...